The Meadowvale Minor Hockey Association is a non-for profit corporation affiliated with the City of Mississauga Parks and Recreation Department. We are staffed solely and exclusively by volunteers from with in the Meadowvale hockey community. The MMHA is one of six area associations that comprise the Mississauga hockey league. Applewood, Erindale, Lorne Park Clarkson Wild, Heartland Dragons & Port Credit are the other five Associations.

Meadowvale Minor Hockey Association has the dual distinction of being one of the largest and youngest associations in the MHL. The Association started in 1976 with 7 teams, a brand new arena, and high hopes for the small but growing community of Meadowvale. The gutsy team of founding members, (Bob Jones, Brian Shaw, Pat Jones, Jim Buckle, Wally Jones, Wally Rawn and Dave Strutt), may not have foreseen the amazing growth rate that the area was to go through, but they did put in place philosophy and structure necessary to support the 87 teams (over 1400 players) and countless volunteers that make out the Organization. The Organization will celebrate their 40th Anniversary this 2016/2017 Season. 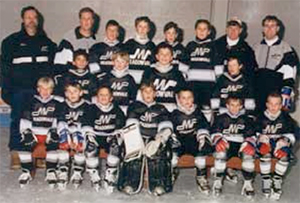 The Organization now supports a booming Tyke Program (4 to 6 year olds) as well as the regular age levels from Minor Novice to Juvenile (7 to 19).

The “Mohawks” are the representative Meadowvale teams playing at the more competitive “A” level. A good indication of the Meadowvale success is the number of former players this organization has seen in the OHL.

As with any young organization that starts from scratch, the identity of the association went through a few changes throughout the 70s and 80s. The team colours during the first decade were various shades of brown white and orange. The late 80’s saw the move to the black, gray and white (LA Kings) jerseys before evolving to the present striking colours of black, yellow and white (Boston Bruins). 2004 saw the introduction of the Meadowvale Hawks (still modeled on the Boston Bruins colours) for our House League Teams. 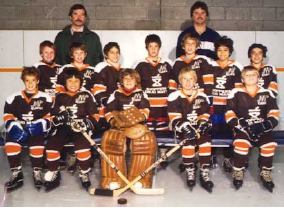 The Meadowvale Association has always had a progressive approach to community hockey. “Family participation” is encouraged as well as the concept of teamwork, respect and good sportsmanship.

In the past Meadowvale ran a “Can-Am Friendship tournament  which Meadowvale and respective teams from Pittsburgh, PA get to know one another on and off the ice. They also were the first association in the MHL to adopt the “S.T.O.P.” program for age levels where contact hockey is played, in the fight against excessive violence in hockey and the promotion of safety.